The Polar Bear Club will be hosting their Annual Breakfast with Santa on Saturday, December 10th at the Clubhouse. We would like to invite you to come have breakfast with Santa and tell him what you want for Christmas!  Every child will receive a gift from Santa when he arrives. The party is free to all children and grandchildren of Roaming Shores residents, age 12 and under. 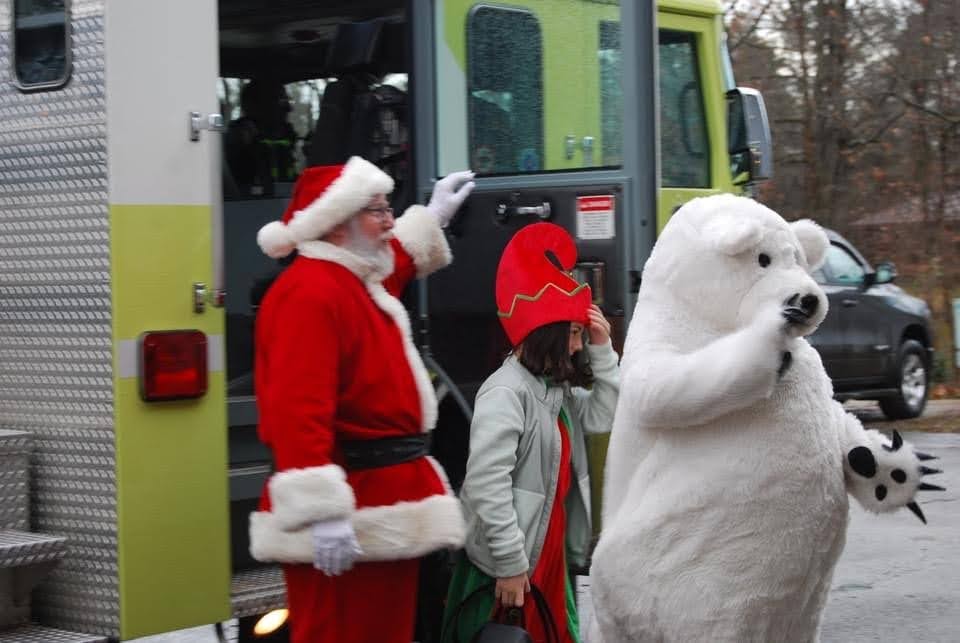 We will be serving pancakes, sausage, scrambled eggs, and fruit.  We will also have an assortment of beverages.

Registration is required with a cutoff date of Friday, December 2nd.  To reserve your seats, please email the Polar Bear Club at: joeythepolarbear@yahoo.com.  Please call Melinda if you don’t get a timely response at 330.507.4917.

When registering, please leave all of the following information:

The Polar Bear Club will send an email confirmation that you are registered for the event within 48 hours.

Thank you and looking forward to seeing everyone there!

The STARS Club Annual Holiday Winery Bus Tour will be held on Friday, November 25th. After a day of Black Friday shopping (or recovery from Thanksgiving), what better way to unwind than getting your friends and/or family together for a lovely tour of our local wineries decorated for Christmas?! The tour will take place from 4pm to 8pm. This tour is one of our most popular and sells out fast! RSVP today!

You must be over 21 years of age. If you’re interested in participating in this event, please text or call Barb at 440-645-7365. The price per seat for this tour are $35/each and must be prepaid. The price helps cover the cost of the bus and proceeds go towards the fireworks fund!

Join your Friends and Neighbors and the Polar Bear Club on Sunday, November 27th from 2pm to 5pm as they invite you and your family to the Clubhouse to help decorate for Christmas! Pizza, pop, and water will be provided. Please bring a decoration to donate as our current decorations are older and falling into disrepair.

During this decorating party in the Clubhouse on November 27th (see article below), Christmas cards will be available if anyone wishes to sign. The Polar Bear Club will be sending these to the 13 Youngstown Air Force Base personnel who will be deployed during the Holiday Season. The club is asking for donations to cover thirteen $25 gift cards that will be included with these cards. Please contact Mindy at 330.507.4917 if you have any questions. Please make checks payable to RSPBC.

A Message of Support

November 8th is a critical date for the Roaming Shores community. We have the opportunity to pass a permanent levy to fund our Village Police now and into the future.  Having our own police department is another reason that our community is a shining star within Ashtabula County. Without this Levy, we are not guaranteed to have a police presence when we need it.  Our police are such an important part of our community that we cannot risk losing.

Please join the Board of Directors of RomeRock Association in our complete and absolute support of this levy and our police.  Whether you are voting absentee or in person, please vote YES.  Encourage your friends and neighbors to vote YES and keep Roaming Shores the safe and beautiful community it is today.

The polling place for Roaming Shores residents is the Clubhouse located at 13 Roaming Rock Blvd, Roaming Shores, OH 44085. Polls are open state-wide from 6:30am to 7:30pm.

Thank You for supporting our police.

Join your Friends and Neighbors and STARS Club on Friday, November 11th at 6:00pm for a Potluck dinner (BYOB) and BINGO at the Clubhouse as we honor our local Veterans. We encourage all local Veterans to join us!

With some cold temps in the forecast we’d like to take this opportunity to remind residents of our snow rules.

At this time, residents should make sure their mail boxes and posts are secure enough to withstand our winter snow plowing operations. Wood posts and mounts can rot over time. You may also want to consider installing a snow shield in front of (not attached to) your mail box to help deflect the snow from the snow plows. Our drivers try not to hit mailboxes, but they do occasionally get knocked down due to heavy, wet snow. Our policy is to only repair the boxes we strike.

The Association would like to remind residents that parking on the roads/and or berms on association-owned roadways is prohibited when the snow depth exceeds 2″ (two inches). This is necessary in order to facilitate the plowing and/or removal of the snow. Please help our plow drivers by removing your vehicles and all obstructions from the roadways.

The Village has an ordinance against plowing snow out into or across the roadways. Please make your plow drivers aware of this rule.

For garbage service, Waste Management asks all customers to please have the area and pathway around your container cleared of snow and ice.

Weekenders and Snowbirds: Homes can and have fallen victim here in Roaming Shores to frozen pipes that burst in the winter. Please remember to shut off your water when you’re winterizing your homes! You can do so at the water meter inside your house. If you need assistance, you can contact the RSV Utility Dept at 440-563-3146 or the Utility Supervisor at 4440-805-9018

October 29th is the date! Line up at 2:30 parade starts at 3:00. Make Sure your Lot# is displayed for the Costume Contest Judges! Be sure to swing by our canopy at the tennis courts after the parade ends and during Trick-or-Treat for hotdogs and cup of cider.

President, Scott Soble called the meeting to order at 10 a.m. Jeff Grosse gave the invocation and Scott led the Pledge of Allegiance.

Bob McClintock reviewed the July Treasurer’s Report, which was approved.

Scott welcomed everyone and thanked them for attending.

Under Legal, Scott reported that there are no current legal issues.

Under Financial and Collection, Nadine reported that thirty additional collection letters were sent out this past week. Funds are still coming in but at a slower pace. We will be contacting our legal counsel to do follow up letters to some members with delinquent accounts who have not responded to previous letters.

Scott Soble reported for Lake Management that testing has ended for the season. The Fish Survey has been completed by Jones Fish and results will be published as soon as Dave Ernes, Aqua Doc and Enviro Science have had a chance to review the findings. Bob McClintock reported that he and Scott have met with our maintenance employees to review dredging procedures and come up with ideas of how to improve the efficiency and effectiveness of the process. Our Maintenance Supervisor, Randy Reubel will be working with the employees and board to develop a three year dredging plan. We are working with very old equipment and part of the discussion included what type of equipment we should be looking at using. We will, however, need to work within the 2023 budget guidelines.

Nadine reported for Lake Safety that we are extremely pleased with the job our Lake Patrol has done this season. Director, Rory Marshall has spoken with Lake Patrol Members to get their input concerning the past season. Chief Roskos will be meeting with the board regarding plans for a police presence on our lake next year. Jim Fell gave a brief overview of the boating season and advised us that Lake Patrol focused on training and safety instruction whenever possible. Jim stressed the need to improve our ability to respond when boaters need to be towed or run out of gas.

Steve Kaufman, our Village Liaison, reported that council is continuing the search for a candidate to fill the Village Administrator position. He is very pleased with the Windstream high speed internet service which was recently completed. He also reported that the lake will need to be lowered about two feet this fall in order to conduct repairs to the dam.

Under Board of Review, Mike Peterson had nothing to report.

Jeff reported for Building, Facilities and Amenities that he and Nadine met earlier today to get a preliminary plan for upgrades to our playgrounds. Playground equipment geared for the younger children in our community would be a good addition. Jeff will get some options and cost estimates together and we will meet with Mindy Fier from the Polar Bear Club to get their input as well. We would like to use rubber mulch as a base under the new and existing equipment. There are several trees that will need to be removed and the existing equipment will be cleaned. Scott reported that we are also looking into a Splash Pad to be located on the grassy area next to the kiddy pool.

Administration and Personnel Nadine reported that we met with our employees yesterday to discuss items that will need to be included in the 2023 budget. The staff and directors will be focusing on reviewing our potential income and expenditures for 2023. Things are running smoothly in our office while Jen continues her maternity leave. Our thanks to Pat and Wendy for all of their efforts. Elizabeth (Ellie) Mae Addair was born on September 12, 2022. We were lucky enough to meet her in person when Jen and Tom stopped in at the office on Friday. She is absolutely adorable.

Club Reports: Nadine reported forthe Polar Bear Club that they will be sponsoring a float in the Halloween Parade supporting the Police Levy. Mindy is looking for teens who would be willing to help with the float. She also let us know that a few tickets remain for tonight’s Clambake. Marie Kaufman updated us on Pickleball Club activities. The club has a new email address shorespickleball@gmail.com. Play will continue as long as the weather is favorable. It has been noted that residents have been allowing their pets on the court. Rules posted on the fence prohibit animals from being on the court. Please follow the posted rules and help us keep the court in its’ current condition.

Under New Business, the board passed a resolution amending the Standing Rules. It will read that the Directors will meet on the first Saturday of each month or at other times approved by the Board of Directors.

The board also passed Resolution R1-1022 which authorizes the Board of Directors to place Police Levy signs on RRA Properties and includes support of the levy in electronic communications.

The meeting adjourned at 11 a.m.