It may have been rainy, but that didn’t stop anyone from having fun Trick-or-treating or at the Halloween Happening at the Clubhouse over the weekend! 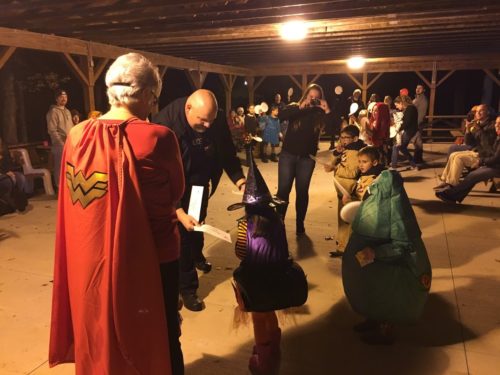 Thanks go out to Chief Will Roskos and his family, the Roaming Shores Police Department, Leeann Moses, Jen Addair, Marlene Hocevar and Audrey Fettig for helping out during the event!

Thank you to Danielle Jackson, Irene Burg, Kathy Maznik, the Hutters, and Tom & Nan-Marie Graham for donating candy for the event and to John Ball for the spooky decorations!

From RSPD Chief Will Roskos

Even though the weather did not cooperate with us on Saturday the Trick-or-Treat after party and costume contest at the RRA clubhouse went extremely well. We would estimate that about 100 people bundled up and came out to participate in the community event. Of our five different categories Mr. Aiden Baker; of the Middle School Division, in his scary clown outfit was ultimately deemed our overall best in show costume contestant.

Listed below are the top three winners in each of the five categories.

I would like to thank the communities’ residents, our special groups and our local business for their continued support and donations which ultimately make these events possible. In addition, I would like to personally thank our volunteers; Amy Roskos, Audrey Fettig, Carolyn Beck, Jeanne Clements, Jen Addair, Leeann Moses, Linda Myers, Madison Roskos and Marlene Hocevar for their decoration of the clubhouse and/or their preparation of the food and beverages that were served during the event.

I truly hoped that everyone enjoyed this event and we look forward to seeing you again next year.